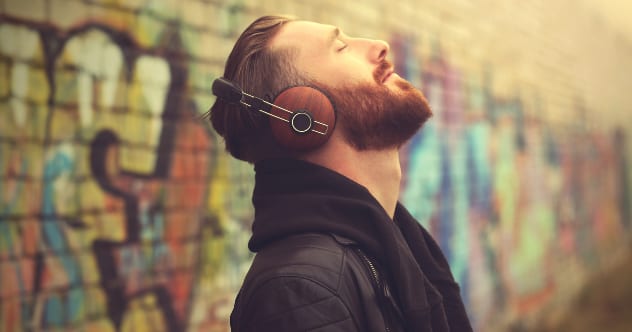 Conspiracy theories have been circulating since before the 19th century. Honestly, knowing humans, probably even longer. Some of these conspiracies really make for some controversial legacies (flat Earth, anyone?). Combining this with our fascination with celebrities’ lives and their downfall, we’ve concocted some weird theories. Throw the dark world of music in there, and you might as well have made Snow White’s poison apple. From Illuminati associations to animal body parts, here are the top 10 weird conspiracies in music.

Supertramp is an English rock band that started in London in 1970. Their 1979 album “Breakfast In America” had a cover that one listener claims predicted the terrorist attacks in New York on September 11, 2001. The album cover shows the perspective of an airplane window with New York City and the Twin Towers in the background. Outside is a flight attendant holding orange juice.

The plane theme combined with New York City is only the first connection of 9/11 with Supertramp. Conspiracy theorists claim that when the image is flipped, the “u” and “p” of the band’s name spells out 911 above the twin towers. They also say the word “Breakfast” predicts that the attacks happened early in the morning. Although coincidences are there, it doesn’t seem likely a British band knew Al Qaida would attack New York 22 years before it actually happened.

Kurt Donald Cobain was an American musician famous for being the guitarist, songwriter, and frontman for the rock band Nirvana. Courtney Michelle Love is an American singer-songwriter (best known fronting her band Hole) and actress who was married to Kurt Cobain. The two celebrities wed in 1992 after only four months of dating.

Cobain committed suicide by gunshot in 1994 after suffering from depression. His first suicide attempt was in Rome just six weeks earlier.

The theory, posited by Tom Grant, states that Love was responsible for her husband’s death. Grant was the private investigator Love hired to find Cobain after the musician ran away from a rehabilitation center following his first suicide attempt. In the documentary “Soaked in Bleach,” Grant claims that Cobain couldn’t have pulled the shotgun’s trigger because there was too much heroin in his system.

Grant also believed the suicide note was fake. Fans were ready to accept this theory as truth. Most were already upset by Love’s release of her album “Live Through This” days after Cobain’s death. They believed she hired a hitman to kill her husband because divorce was on the horizon. The Seattle Police Department and people close to Cobain, including the Nirvana manager Danny Goldberg disagree with the theory.

Professionally known as Stevie Wonder, Stevland Hardaway Morris is one of music’s most successful songwriters and musicians. He is considered a soul, jazz, funk, rock, and pop legend. He’s also blind. But not everyone believes this legend is vision-impaired. In 2014, a video circulated that looks like Stevie Wonder caught a microphone that Paul McCartney accidentally knocked over on stage. Conspiracists are asking, how can a blind man do that?

Conspiracists also point out that he includes imagery in the songs he writes and enjoys front-row seats at basketball games. Besides the problematic and ableist support to this theory—not everyone who is legally blind is completely without vision—in Stevie’s case, it’s not true.

Born six weeks premature, Stevie Wonder became blind shortly after his birth from the oxygen used in the hospital incubator to stabilize him. Still, the fact that he enjoys joking about his vision-impaired status, like when he said he’d flown a plane before, doesn’t always help calm the conspiracists.

7 Rihanna Is In The Illuminati

Robyn Rihanna Fenty is a famous singer from Saint Michael, Barbados. She’s had multiple hits since her career started in the 2000s. In 2019, she sold a record-breaking 251 million downloads and ringtones. For someone so successful, it’s no surprise Rihanna has had a variety of conspiracies to her name — everything from having non-blinking, reptilian eyes to framing Chris Brown. Another notable theory is that she is part of the Illuminati.

And not only is she a member, but some fans claim she also had an arranged marriage with Chris Brown, another suspected member. The rumors started in 2012 when Rihanna got a slanted cross tattoo on her neck. The diagonal cross is one of the symbols of the Freemasons, and fans believed she was showing her alliance.

In 2018, the belief that Rihanna was part of the Illuminati created some controversy during her visit to Senegal. Rihanna was flying to Dakar to attend Global Partnership for Education conference. But she faced protests from 30 religious groups against Freemasonry. Oumar Diagne, the spokesman for the coalition of religious groups, stated, “Rihanna does not even hide it. She is part of the Illuminati.”

Rihanna has had references to Illuminati symbols in her music video since 2012. For example, her S&M video calls her the Illuminati Princess, and the Umbrella video is filled with pyramids. However, it was more to play into the publicity the rumors brought.

James Marshall Hendrix, better known as Jimi Hendrix, is an American singer, songwriter, and musician. He is one of the 20th century’s most influential electric guitarists. Hendrix died in September 1970 from choking on his own vomit. The post-mortem indicated his stomach was filled with barbiturates, also known as sleep-inducing drugs or muscle relaxants. Hendrix’s death was written off as a tragic accident until James “Tappy” Wright provided a different explanation. In his 2009 book “Rock Roadie,” Wright explains that Hendrix’s manager, Michael Jeffery, murdered the guitarist.

Wright claims Jeffery force-fed the drugs to Hendrix so he could collect the life insurance. Wright explains that Jeffrey was afraid he would be replaced with a new manager and was also the beneficiary of Hendrix’s $2 million life insurance policy. In the book, Wright explains that Jeffrey confessed to him in 1971, saying he “had to do it.” Since Jeffrey died in a plane crash over France in 1973, we cannot hear his defense to these accusations.

Sir James Paul McCartney is an English songwriter and co-lead vocalist and bassist for the Beatles. Although McCartney sang live in 2018 and 2019 for his Freshen Up Tour, some believe this wasn’t the original Beatle. Conspiracy theorists claim the real McCartney died in 1966 in a car crash. To hide the tragedy, the Beatles asked an imposter, Billy Shears, to take McCartney’s place. These claims started when someone read into the lyrics of the Beatles songs as hints of McCartney’s death. In October 1969, an unknown caller called into the WKNR radio show. They explained that the words “Turn me on, dead man” from the song “Number Nine, Number Nine,” and “I buried Paul” from “Strawberry Fields Forever” confirmed McCartney was dead.

More clues and justifications surfaced. For example, when the album cover of “Abbey Road” was released, fans pointed out that McCartney held a cigarette in his right hand. The real McCartney is left-handed. Fans also claimed he looked out of step with the other band members. In the song “Glass Onion,” John Lennon sings, “Well, here’s another clue for you all, the walrus was Paul.” Fans assumed “walrus” is Greek for a corpse, and this was another clue McCartney was dead.

4 Jay-Z Can Travel Back In Time

Shawn Corey Carter, stage name Jay-Z, is a rapper and producer also famous for being married to Beyoncé Giselle Knowles-Carter. The couple has various conspiracies surrounding them, but the weirdest must be Jay-Z’s time-traveling abilities. The conspiracy that he can time-travel all started from a photograph by Sid Grossman of a Harlem scene in 1939. The man in the photo looks like Jay-Z and reflects the rapper’s mannerisms. A second theory then emerged that if he can’t travel back in time, then he must be a vampire who has stayed alive all these years. How else can immortality be explained?

The more likely explanation for the facial similarities of the man in the photo is Jay-Z is related somehow. Perhaps a twice-removed cousin of his great grandfather.

Robert Nesta “Bob” Marley was a Jamaican musician, singer, and songwriter considered the pioneer of reggae. In 2018, stories started circulating on social media that a former agent of the Central Intelligence Agency (CIA), Bill Oxley, confessed he killed Marley. The death-bed confession claims that the CIA was responsible for infecting Marley with cancer viruses and bacteria. Since the release of the Bob Marley Documentary on Netflix indicates the CIA admitted to keeping tabs on Marley in the 1970s, it easily made fans believe the agency was behind his death. People have tried to debunk this theory. They found no Bill Oxley associated with the CIA. The photo used in the circulated story was also a stock photo by a Polish photographer, Katarzyna Bia?asiewicz.

This story may not be true, but Marley did pass away from brain cancer that started with an infection in his toe. There was also an assassination attempt on his life in 1976 that was linked to the CIA. The two gunmen involved claimed they were contracted by the CIA in exchange for guns and drugs. So, perhaps it’s not so wild some would assume the CIA contributed to his early death in 1983.

Elvis Aaron Presley has often been coined the “King of Rock and Roll.” Although some celebrities were falsely claimed dead, fans found it hard to believe Elvis was gone. They said he was still alive. After he died in 1977, there were multiple headlines of people seeing Elvis alive during the 1980s and 90s. Examples include seeing him buying a fuse in Michigan, getting phone calls from him, and seeing him as a background extra on the film Home Alone. Gail Brewer-Giorgio even wrote a book titled “Is Elvis Alive” in 1988.

The theory was Elvis faked his death to get away from the pressure of fame. Fans believed his coffin, which was difficult to carry, had a cooling system in it. The truth is it was made of copper. Others believed he found a body double or dummy for his funeral since the body didn’t look like him. With his heavy drug use and the reality that dead bodies have pale complexions, it is normal for people to not recognize corpses.

1 Gene Simmons Has a Cow’s Tongue

Gene Simmons is the bassist and frontman of the rock band Kiss. With Kiss’s outrageous and sometimes bizarre performances for its time during the 1970s, it’s of little surprise a weird conspiracy emerged around Simmons. During performances, Simmons often waggled his tongue at the audience. It was long and pointy. A rumor then emerged that his tongue was such a way because he had cow’s tongue grafted onto his own to extend it. The rumor even extends to beliefs he had his mouth enlarged to make room for the tongue. Simmons has admitted this is his favorite myth about him.

10 Songs That Have Stood The Test Of Time

10 Things You Wouldn’t Believe Cause Allergies

10 Conspiracy Theories That Tupac Faked His Own Death

Top 10 Shocking Stories From People Who Should Be Dead

10 Bizarre Claims Made To Disprove Evolution

Top 10 Serial Killers Who Had Even Creepier Admirers

10 Ways Nerds And Scientists Have Inspired Each Other

10 Great Speeches That Really Put The Boot In

10 Facts About The Controversial History Of Abortion And…

10 Sex Myths We All Believe

Top 10 Ways Hollywood Lies To You About Pirates

Top 10 Books That Will Change Your Life