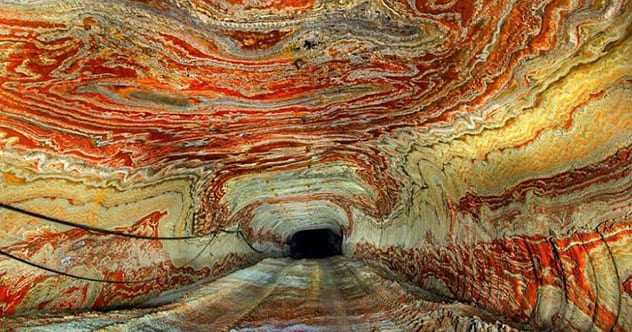 Once Covid-19 is a thing of the past, we will once again be allowed to travel unencumbered, to exotic far-off places. (This is the ongoing hope, at least.) On this list are just some of the most unusual, challenging, and awe-inspiring natural wonders of the world that are truly a must-visit for those who love exploring new and strange places.

Monte Fitz Roy lies in the Southern Patagonian Ice Field and stretches 3375 metres above sea level. In 1877, Francisco Morena named the mountain Fitz Roy in honor of the captain of the HMS Beagle, Robert Fitz Roy. This majestic mountain is also called Cerro Chaltén, with Cerro meaning ‘hill’ and Chaltén meaning smoking mountain. The smoking mountain moniker comes from the belief that the mountain was a volcano as its peak is mostly covered by clouds. At sunrise Fitz Roy takes on the color of pink roses.

Yvon Chouinard summited Fitz Roy in 1968 and was so in awe of this breathtaking natural wonder, that he used the shape of the mountain to inspire the logo of his clothing brand: Patagonia. If you are feeling adventurous and up to climbing a mountain on your next holiday, you might want to try Fitz Roy, but be warned, it is considered one of the most challenging climbs in the world.[1]

Jamaica, famous for being the birthplace of Bob Marley and Usain Bolt, Jamaican rum, and Blue Mountain coffee, is a hugely popular tourist destination. Here you will experience excellent local cuisine, be enlightened on the history of pirates, and discover fantastic beaches. When the weather is good, you can also take a boat trip out on the Luminous Lagoon at night and wait for magic to happen.

When the water of the lagoon is stirred, it lights up in shades of luminescent blue. This is because of a thriving population of microscopic dinoflagellates that live in the lagoon. Boat tours depart from the Glistening Waters Marina, and you are even allowed to jump into the water and swim while surrounded by the luminous glow.[2]

8 The Troll of North-West Iceland

Sea stacks are geological landforms that protrude from the sea and are continuously formed by wave erosion. These formations make for dramatic viewing, especially the large ones. Some of the most awe-inspiring sea stacks include Ball’s Pyramid in Australia, the Sleeping Lion in Ecuador, and the Old Man of Hoy in Scotland.

If you are planning a trip to Iceland, you should include a trip to the Troll of North-West Iceland on your itinerary. This imposing sea stack stands 50 meters offshore on Vatnsnes peninsula. Some tourists have likened the structure to a massive animal drinking water, with many saying it resembles a dinosaur.

Legend, however, has it that the sea stack, formally known as Hvítserkur, was a troll who lived in Strandir in the Wesfjords. The troll had one goal and that was to tear down the bells at a nearby convent, as Icelandic trolls hate churches and their bells. Before the troll could manifest his evil plan, he was caught by the first rays of the sunrise and turned into stone.[3]

While The Needles is not the most exciting sounding name, it does belong to one of the most beautiful natural wonders in the world. The Needles is the name of three chalk stacks that crosses the centre of the Isle of Wight. Unfortunately, travel is not permitted to these extraordinary rocks, because of dangerous tides, but they make for fantastic viewing from the headland.

Originally there were four rocks, but one collapsed during a huge storm in 1764. The Needles were so named because of that fourth rock that was shaped in the form of a needle and called ‘Lot’s Wife’. The name stuck, even though the remaining three rocks don’t remotely resemble needles. The gap where Lot’s Wife protruded from the sea, is easily discernible and looks like a missing tooth from a very large mouth.[4]

If you ever find yourself in Russia (and if you’re not claustrophobic), get yourself a special government permit and take a tour of the abandoned Yekaterinburg salt mine. Inside you will find psychedelic natural formations of carnallite layers along the walls, floors, and ceilings in yellow, white, red, and blue. Millions of years ago, a very salty sea completely dried up and left behind these carnallite mineral deposits. https://www.miningglobal.com/smart-mining/slideshow-stunning-photos-salt-mine-russia

The stripey formations lie 650 feet below the surface and were first introduced to the public when photographer Mikahil Mishainik spent more than 20 hours exploring the mine and taking several pictures. He described the experience as ‘being constantly thirsty and losing all track of time.’[5]

Top 10 Iconic Places Pictured From Behind

5 Highest island peak in the world

Jutting out at 16,024 feet above the Indonesian jungle, the Carstensz Pyramid is the highest and probably most exotic island peak in the world. The Pyramid is a large limestone escarpment located in Western Papua and the most remote of the Seven Summits. (Link 6) Its height has been the source of some controversy with some navigational air maps stating it to be 16,503 feet. There are several glaciers on the slopes of the mountain, with many having retreated and disappeared over the past 20 years. Back in 1623, the people of Holland didn’t believe John Carstensz, a Dutch explorer, when he told them he had seen ice and snow near the top of the Pyramid. This was because of the mountain’s proximity to the equator. Carstensz and his crew were the first Europeans to lay eyes on the mountain.

Climbing the mountain is a challenge that the adventurous will savour, as it takes quite a long time to get through the tropical jungle just to reach the base. For this reason, the best time to attempt a climb, is between April and November. The mountain was first conquered in 1962 when Austrian mountaineer Heinrich Harrer led an expedition to the top. Harrer was also the author of the best-seller, Seven Years in Tibet.

These days, access to the mountain is only permitted through adventure tourism agencies and a government permit is required.[6]

Should your travels lead you to China, the Yellow Dragon Gully (Huanglong national park) is a must-visit. This exquisite travertine spreads through the forests and glaciers in Huanglong Valley, some say like a huge golden dragon. The starting point is at the Buddhist temple at the top of the valley and it ends at the Guest Welcome Pond. Throughout the year the natural pools here, formed by calcite deposits, change color from yellow to green or blue and even brown. The valley was declared a World Heritage Site in 1992.

While exploring the Yellow Dragon Gully, you may encounter Sichuan golden snub-nosed monkeys or even giant pandas. A cable car is available during high-peak tourist seasons and there is a wooden boardwalk along the travertine which is accessible to visitors.

Just keep in mind that the temperature on average is 7 degrees Celsius throughout the year, so you might want to pack a very thick jacket or two.[7]

Sulphurous hot springs, salt mountains, and acid pools might not sound very inviting, but they attract a huge number of visitors to Ethiopia each year who want to see the Danakil Depression in person. These include tourists, salt miners and scientists. In fact, salt miners still travel by camel caravan to extract salt slabs from the flat plans around Lake Afar. It is one of the hottest places on Earth and one of the lowest, at 400 feet below sea level.

The Danakil Depression landscape resulted from the ongoing divergence of three tectonic plates and has a complex geological history that includes volcanic activity, erosion, inundation by the ocean and rising and falling of the earth. The vast plain is so ‘alien’ that researchers did a study in 2016 to determine whether microbes would last in the hot and inhospitable environment. It turned out that they did, and this led scientists to wonder whether they would also be able to survive on Mars.

The sulphur springs of Dallol form part of the Depression and are a great tourist attraction as people love looking on while neon green and yellow liquid is discharged from the rocks.

If you are looking for a holiday with a difference (and love waking up early), this might just be the destination for you. Be sure to take sturdy footwear along.[8]

High tide is the best time to visit the Taga village in Samoa and ask the residents to accompany you to the Alofaaga Blowholes. These blowholes are the result of lava flows that created underwater caves. Over time these caves grew upwards until they became tunnels that allowed the ocean to connect to the rock face above. As the sea water breaks at the end of one of these tunnels, it rushes through it at high speed, erupting through the hole at the top in a waterspout that reaches 20 meters and more.

To add to the fun, the residents of Taga village will throw a coconut in the hole in the rock face and watch the tourists in amusement as they gasp when the water shoots the coconut at least 100 feet into the air.[9]

1 Where the cliffs meet the ocean

As far as beach vacations go, islands are at the top of the wish list for most travellers. White sand beaches and aquamarine waters never get old. For this reason, Hawaii is a favoured travel destination with its emerald green hues, sparkling seas, excellent cuisine, and beautiful culture. It is in Hawaii, on the island of Kauai, that you can have the vacation of a lifetime visiting the NaPali Coast.

Here you will find fantastic beaches, hiking trails and dramatic cliff faces, not to mention archaeological sites. You can hike to the NaPali coast via the Kalalau Trail or drive to Polihale Beach or Kee Beach where you will have a stunning view of the coastline. You can even hire a kayak or motorized boat to explore the coast via the sea, taking some time to snorkel on the way there. If you want a truly all-round experience, you can take a helicopter tour which will allow you to see several of the major valleys along the NaPali coast from an aerial perspective.[10]

Top 10 Famous Directors Who Were Fired

Top 10 Kits You Can Buy To Survive Any Situation

10 Weird Things People And Businesses Have Tried To…

Top 10 Chilling Revelations About The Stasi Of East Germany

10 Common Things That Were Once Banned

Top 10 Most Talked-About Hotels In The World

10 Controversial Debates About Food And Cooking

8 Recent Breakthroughs That Prove The Future Is Already Here

10 Common Misconceptions About Ancient Greece And Its Myths

10 Extremely Important Things That Were Invented By Women

10 Obscene And Ridiculous Things The Rich Do With Their…

10 Gruesome Deaths That Have Been Attributed To Ghosts

10 Transgender Facts You Are Afraid To Talk About