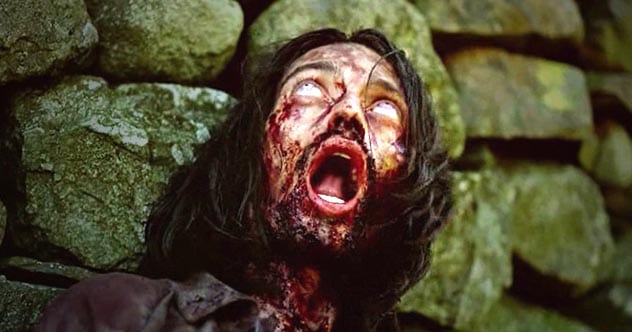 [embedded content]
Charlton Heston is the last man on earth, pretty much. One of the few survivors of a global pandemic, caused by biological warfare. A lone research scientist (Heston) injects himself with a vaccine of his own design, which seems to work.

However, the solitude of being the only survivor starts to drive Heston a bit mad, and he spends most of his time barricaded inside his apartment, which is stacked high with guns.
So far, so realistic.

However, when he is captured by these virus infected mutants, who he calls The Family, instead of attacking him they put him on trial, or at least a mock trial.
Now it is getting a little surreal.

The Family is run by the head mutant, a former TV anchor-man, played by Anthony Zerbe, who has a disturbing Manson vibe about him.

There’s a lot of other weird stuff too, including a lot of spear-throwing (unnecessary it would seem, given the abundance of weaponry in Heston’s apartment) and a crucifixion.

Most disturbing, however is the amount of time that Charlton Heston spends shirtless, for no good reason.

[embedded content]
Mark Ruffalo is a doctor who treats a man that has gone suddenly blind. The following day, Ruffalo, too, goes blind, and he realises that the blindness must have been caused by some kind of contagion.

Except for Ruffalo’s wife, played by Julianne Moore, who retains her sight. In order to be able to stay with her husband, however, she pretends to be blind too.

Blindness is a film about what happens when we become completely dependent upon the kindness of strangers, and about how thin the veneer of decency can be when it’s every man for himself.

[embedded content]
Outbreak, released in 1995, concerned an outbreak of an Ebola-like virus in Zaire, and it was an immediate success. Partly this was due to the performance of its all-star cast, and partly because, at the time of its release, Ebola was breaking out in, of all places, Zaire.

The virus is spread through a series of unfortunate, not to say unlikely, events, which include a military cover-up, a smuggled monkey, and its release into the wild, and a broken vial of blood which releases the virus as effectively as Pandora and her box.

Starring Dustin Hoffman, Rene Russo and Morgan Freeman, with star turns by Kevin Spacey, Donald Sutherland and Cuba Gooding Jr, the film’s premise was a little bit ridiculous but the levels of denial among those who should know better is spot on.

[embedded content]
How do you cure cancer? Easy. Give it the measles.

Barmy? Possibly. For some reason, not adequately explored, someone must have skipped the usual drug trial protocols, because, next thing you know, the measles has wiped out most of the world’s population. Oops.

Not to worry. Will Smith, is a former soldier turned virologist. Which means that when the measles turns his neighbours into mutant-zombie-vampires, he is trained to both fight them and cure them, all while trying to make contact with other virus-free survivors.

Living alone, with only his dog and some shop mannequins for company, Smith starts to go a little bit mad. He is plagued by the question of whether he is the only person to survive the virus. Could there be other people out there too? I am Legend was well received both critically and popularly, with everyone praising the performance of Will Smith. And his dog.

The mannequins were a bit wooden.

[embedded content]
The Andromeda Strain was based on a novel by Michael Crichton, who was a doctor before he was a writer, so presumably knew a thing or two about viruses. When a satellite returns to earth, it brings with it a micro-organism that causes blood to clot in the veins. Those people who don’t die instantly, are driven to kill themselves.

Obviously, NASA has a protocol for dealing with alien micro-organisms. This protocol, codenamed Wildfire, requires sending a crack team of scientists to investigate, while the military prefer their own solution – let’s nuke it. Isn’t that always their solution?

The movie focusses on the disconnect between science and the military, and the dangers of devising rigid protocols to deal with unknown situations.

[embedded content]
This one is a little bit scary. Directed by Steven Soderbergh, Contagion is a movie about how viruses spread. It is about how difficult they are to contain, and how devastating the consequences can be when they’re not contained.

The film has been praised by scientists for its accurate portrayal of the difficulties of dealing with pandemics. Its all-star cast may help distract you from the impending breakdown of society. The film has everything, from politicians trying to downplay the seriousness of the epidemic, to charlatans trying to make a quick buck selling homeopathic cures, and heroic scientists who work round the clock to try to develop a vaccine.

Soderbergh said that he was trying to make an ‘ultra-realistic’ film about pandemics, and their affect on social order. Job Done.

[embedded content]
When Cillian Murphy awakes from a coma after 4 weeks, the world is a different place. He walks the streets of a deserted London, wondering what on earth happened has happened, and looking for signs of life.

It turns out that an animal rights group has accidentally released a chimpanzee with a highly contagious virus which causes extreme rage and loss of control. During the 28 days he has been asleep, society has collapsed, and the world has all but ended.

28 Days Later is not a film about viruses, as such, but about what happens to society when the normal rules of life are suspended.
It’s not pretty.

[embedded content]
If you want a virus outbreak film that doesn’t take itself too seriously, you could go for Train to Busan. A South Korean action/horror film, it broke records in Korea for audience size.
Imagine you are on a busy train. A woman boards at the last minute, looking pretty ill. The train has barely pulled out of the station before the woman mutates into a zombie-figure, who then attacks the guard, who then also mutates.

Not only that, but, whilst trying to quarantine the infected passengers in one railway car, your train passes burning buildings, and other mutant-zombies, so there’s no point trying to get off. What do you do next?

Train to Busan has been described as ‘the best zombie film ever’, and did wonders for the popularity of South Korean cinema, although probably not quite so much for its train companies.

[embedded content]
What do you do if a deadly virus has wiped out most of humanity? Obviously, you build a time-machine and send Bruce Willis back from a dystopian future to sort it out. 12 Monkeys is directed by Terry Gilliam, so you know it’s also going to be a little bit strange.

Brad Pitt is certainly strange. As are the other inmates of the lunatic asylum to which Bruce is very quickly confined. Pitt’s performance won him a well-deserved Oscar nomination for his performance as an anarchist eco-terrorist with daddy issues and a side serving of psychosis.

In truth the movie isn’t really about a virus. It’s Bruce Willis saving the world. Again.

And that is always fun to watch. But it is Terry Gilliam’s direction, with his trademark black humour and twisted endings and Brad Pitt’s crazy man performance that takes this film from fun to fantastic.

Death In Venice stands apart from the others on this list as being not just entertainment, but art. Scene after scene we are met with some of the most beautifully filmed images of one of the world’s most beautiful places: Venice. The film follows Gustav von Aschenbach who is taking time to recuperate from a nervous breakdown in Venice, which—ironically—is beginning to feel the effects of a cholera epidemic.

In between lusting after an adolescent polish boy staying at the same hotel and dealing with a mid-life crisis, Aschenbach has flashbacks to the death of his daughter and his career as a composer. The unravelling of the of the protagonist’s life through the film leads us to one of the most poignant and macabre endings ever. Director Luchino Visconti (featured on Top 10 Films About Economic Disaster You Really Need To Watch for The Damned) proved himself a true visionary in the production of this film.

The soundtrack by Gustav Mahler is eerie, beautiful, serene, and breathtaking.

Watch this film before any other on this list.

Top 10 Notable People Who Have Died Of Coronavirus

Top 10 Behind The Scenes Facts About Tim Burton Movies

10 Animal ‘Facts’ Of The Ancient World

10 Facts That Are Only True Depending On Where You Live

10 Forbidden Places Where Outsiders Are Arrested (Or Worse)

Top 10 Classic Books That Are Unreadable

16 Most Dangerous Volcanoes In The World

10 Strange Things That Happened When A Celeb Died Without A…

10 Victims Whose Parents Never Gave Up

10 Uncomfortable Facts About The U.S.A.

10 Reminders Of The Realities Of Mind Control