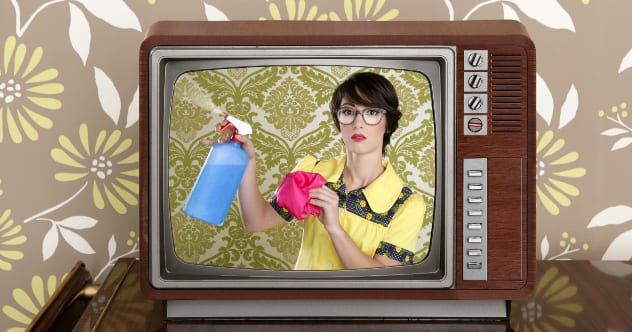 With commercial-free programming becoming the standard for television audiences, many people see those advertisements as nothing more than a nuisance to skip. But others still enjoy watching them – the funny ones especially. Maybe you couldn’t care less about football or movies, but you still watch the Super Bowl and the slowly dying Academy Awards because those live events often feature cutting-edge, highly-anticipated promotions that can set the tone for the rest of the year in advertising.

Aside from showing off their products, many brands try to stand out so even if you don’t remember what they’re selling, you remember the commercial. In an effort to be memorable, some commercials push the boundaries of what’s acceptable, in terms of broadcast standards, current events, and public taste. Here are 10 commercials you won’t see on television anymore:

10 The Flintstones Light One Up

Cigarette ads weren’t always controversial and were a common fixture in the early days of television. Of course, this was before they were banned from TV and radio airwaves in 1970. There have also been cigarette spokespeople and mascots aimed at kids, most notably Joe Camel. But actual cartoon characters hacking it for cigarettes?

That happened back in the 1960s when The Flintstones would shill for Winston Tobacco, which sponsored the prime-time animated show. Now, who thought that a children’s caveman cartoon would be a great cigarette gimmick? Imagine Bart Simpson extolling the virtues of Marlboro instead of Butterfinger back in the 1990s. Yabba Dabba don’t.

In 2019, the razor company Gillette made a commercial that waded into the #MeToo movement, imploring men to be “The Best That Man Can Be.” People often say they want to see companies with influence take a stand on important social problems. Silence on an issue can be interpreted as acceptance or tacit endorsement. But if a brand is going to take a stand on an issue, it has to thread the needle or it’ll backfire.

With an almost two-minute-long commercial, Gillette struggled to find a clear message. In the end, the ad didn’t really please anyone on either side of the debate (and down-right angered huge swathes of their client-base).

They fielded hecklers from #MeToo proponents, questioning the company’s commitment to the cause. And then there were questions as to why the company was taking a stand at all. If a business is going to stake a position on a controversial issue, it can’t just be to boost sales.

A soft drink commercial starring a member of America’s royal familydoesn’t sound all that controversial. But it’s another case of corporate interests appearing tone-deaf while wading into political waters.

The 2017 ad, starring Kendall Jenner, features several images of people marching against injustice. She models for photographers while a banner-filled protest walks past her. Thirty seconds in and there are already so many things to shake your head at — and we’re not even talking about the ad’s random cellist or the spliced scenes of a frustrated scrapbooker. (Yeah, we’re confused too).

Ultimately, the crowd stands opposite police officers in the street. Ever the reality TV hero, Jenner walks through the crowd, grabs a can of Pepsi, and hands it to one of the officers. The cop takes a sip, and the crowd erupts in joy. It took only one day for Pepsi to pull the ad after it was accused of trivializing the growing Black Lives Matter movement that protested police brutality.

This looks even worse almost four years later after seeing cops showing signs of solidarity with protesters in the summer of 2020, taking part in the Jan. 6 riot in Washington.

7 Wait For the Beep

With all the hoopla surrounding Super Bowl commercials, the NFL and the network broadcasting the game usually have plenty of commercials to choose from. Many ads do push the envelope, but others are nixed before they make it to your tv.

This commercial, which was made for Super Bowl XXXIII in 1999, starts out harmless enough with the beginning of a blind date. As a man walks a woman to his car, she gets in before him. Thinking she’s alone, she rips a loud one. The clueless guy gets in the car and introduces his date to an unseen couple in the backseat, making it the worst blind date ever.

It was too crude for the NFL and Fox at the time. Looking at it now, the craziest thing about the commercial is that it promotes a cheap beeper service. What does trusting a fart have to do with beepers? Maybe they’re both a bad idea. We have to wonder if a “memorable” ad like this could have saved the beeper market or if, like that date, it was just too far gone.

6 Who Would Jesus Hate?

Some ads really do deserve to be censored. This was another case of a small company taking a shot with a commercial during the big game, this time in 2011. The ad for JesusHatesObama.com (yes, that was the name) features a Jesus bobblehead glaring at a Barack Obama bobblehead, until Obama falls into a fishbowl, making Jesus smile.

While this ad may have been popular with some viewers, executives and the regular Fox Network knew the mass audience for Super Bowl XLV wouldn’t be so forgiving.

You’ve probably never heard of National Airlines. The company was once one of America’s top airlines but was acquired in 1980 by Pan-Am, which has also gone the way of the dodo. The most memorable aspect of National Airlines was their ads in the 1970s, both on the airwaves and in print. It featured young, attractive women suggesting something that starts with the letter F in a not-so-subtle tone.

“I’m Judy. Fly me.” The burgeoning women’s liberation movement wasn’t too keen on the airline so overtly pushing the envelope. And it wouldn’t fare much better today with the #Metoo movement either.

It’s safe to say that Groupon biffed it on all fronts in their Super Bowl commercial from 2011. Most Super Bowl commercials aim for a laugh, but others try to pull at the heartstrings. Both ways have produced memorable and well-received ads, but sticking to one tone is key, especially when important issues are involved. 30 Seconds of air time just isn’t long enough to jump from drama to comedy.

Actor Timothy Hutton opens the ad with a somber intro, reminding us that the way of life for Tibetan people is in critical danger. And he wasn’t wrong since well over 250,000 of them have died in prison camps since the 1950s.

But the tone quickly changes, encouraging people to save money on fish curry in a Tibetan restaurant located in Chicago. Co-opting the plight of the Tibetan people for a “humorous” attempt to promote cheaper dining and activities didn’t sit well with anyone.

It wasn’t all that long ago that racial stereotypes were woven into the media landscape. Commercials were no different, using over-the-top caricatures as part of their campaigns. The Frito Bandito was an animated character in the 1960s and 1970s. It was a walking, talking Mexican stereotype that promoted corn chips.

If it reminds you of Speedy Gonzalez, that’s because the Frito Bandito was voiced by Mel Blanc, who voiced Speedy Gonzalez for Looney Tunes. Seen in a woke light, this chip-loving bandit looked more like something from a Three Amigos spin-off than a time-tested brand.

A commercial doesn’t have to cross boundaries or cause offense to get yanked off the airwaves. McDonald’s ran a campaign in the mid-1980s around the character Mac Tonight, a piano player dressed in black with a crescent moon face and sunglasses.

They were trying to make the fast-food chain hipper (think Poochie from The Simpsons). It seems harmless enough, right? Not to the estate of singer Bobby Darin, which accused McDonald’s of ripping off the song “Mac The Knife.” As an added bonus, the character inspired an parody called Moon Man years later that would anger even the mildest cancel-culturist.

1 The Pizza Did It

One of the biggest tropes of classic film noir is a scene where some no-nonsense fella encounters a dizzy dame in the midst of having a break-down. Like it or not, the image of this trench-coat-clad detective slapping the woman until she “gets a hold of herself” is engrained in our brains. Images like that helped normalize violence against women for a long time. It was even used to sell pizza in this ad for Jeno’s Frozen Pizza.

The man kicks down the door and the woman screams until she realizes he’s here for dinner. While the man explains why the frozen pizza will be easy to make, he hits her arm with the box. Twice — just to make sure he got his point across. This was definitely not the beginning of a beautiful friendship.

Top 10 Once-Popular Treats You Can No Longer Eat

10 Celebrities That Have Cult Followings

10 Wholesome Pranks with a Dark Side

10 Strange Hobbies That Are Becoming Popular

10 Things That Restored Our Faith in Humanity

10 Comedians Who Were Censored Over Jokes

10 Celebrities Who Were Sued By Their Fans For (Mostly)…

10 More Haunted Landmarks around the World

Top 10 Most Expensive Animals Ever Sold

10 Creepiest Events That Happened At The Cecil Hotel

Top 10 Peculiar Happenings In The World Of Horses

10 Apocalypses That Didn’t Happen This Century

10 Horrifying Facts About The Voodoo Murders Of Clementine…