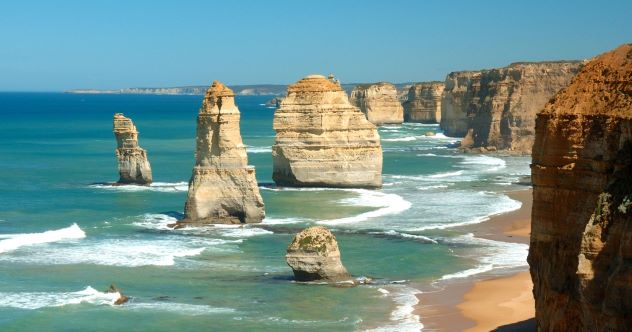 Nature reserves are protected land areas where fauna and flora thrive, and visitors can experience them in their natural habitat. There are around 100 countries worldwide that have several reserves, with Australia topping the list at 285. Naturally, some reserves are more famous and receive more visitors than others, including Yellowstone, the Galapagos Islands, and the Serengeti National Park. These all have their own unique features that keep visitors coming back for more.

On this list are some legendary facts about other, also well-known, nature reserves around the world that might just inspire a bucket-list entry or two.

10 Dinosaurs in the Kruger

South Africa is home to the world-famous Kruger National Park, where those in the mood for a safari can keep an eye out for a wide variety of wildlife and over 500 bird species. In addition, the area covered by this nature reserve is made up of six different ecosystems containing over 2,000 plant species. It is also one of the most extensive nature conservation areas on Earth, covering around 20,000 square kilometers (7,500 square miles).

Millions of years ago, however, a different set of creatures roamed the area where the Kruger stands today. Dinosaurs of all shapes and sizes found a home here, and the fossilized skeleton of a Euskelosaurus can still be viewed along the Nyalaland trail.

At the Golden Gate Highlands National Park, also in South Africa, at least 10 dinosaur nests and eggs (many with embryos) were discovered in 2012. The nests and eggs were taken from sedimentary rocks dating back to the Early Jurassic Period, and at the time, it was the oldest nesting site ever found.[1]

The Olympic National Park in Washington State was established in 1938 by President Franklin D. Roosevelt. The aim of the park is to preserve the unique landscapes and animals within its borders.

From within the park, visitors can take in the majestic Olympic Mountains, camp in the Hoh Rain Forest, and do some whale watching. As night falls, the Milky Way and even some of our neighboring planets become visible in the sky overhead.

Along the Northern Olympic Peninsula lies the stunning Lake Crescent, which forms part of a fascinating legend that has been passed down over 10,000 years. The legend has it that the Klallam and Quileute tribes were caught up in a battle that enraged the Mount Storm King. The 4,537-foot mountain threw a boulder at the fighting tribes, which ended up splitting the valley they were in and creating Lake Southerland as well as Lake Crescent.

Science revealed that around the time of the legendary battle, a massive earthquake resulted in a landslide that split the valley as well as the waterway.[2]

Port Campbell National Park sits on the Shipwreck Coast in Victoria, Australia. The animals found here include echidna, southern brown bandicoot, and swamp antechinus. You will also find wandering albatross, penguins, and dotterels along the shore, and from the Great Ocean Road, you can watch southern right whales and blue whales from June to October.

One of the biggest attractions of the park, however, is a collection of limestone stacks called the Twelve Apostles. It is believed that the limestone was deposited between five and fifteen million years ago. The stacks were formed by erosion caused by the Southern Ocean. Originally there were eight, but one of the stacks collapsed in July 2005 because of ongoing erosion. It is expected that the other stacks will eventually follow suit.

Great Ocean Road itself has a fascinating history too. Construction on the road began in 1919 with the idea to invite road transportation while creating thousands of jobs for Australian soldiers who had returned from WWI. Today the road is the world’s largest war memorial.[3]

Japan is the location of several national parks, many of which are set against the backdrop of dramatic cliffs and wild coastlines. The Shiretoko National Park in Hokkaido falls into this category. It is surrounded by 200 square kilometers (77 square miles) of ocean with sheer cliffs on the western edge that drop into the Sea of Okhotsk. On these cliffs, seabirds build their nests, and along the shore, brown bears can be found ambling over the sand. The park covers a large portion of the Shiretoko Peninsula.

The Ainu people were the earliest inhabitants of Hokkaido, and several Ainu artifacts have been discovered on the Shiretoko Peninsula. They shared their home with brown bears, and a strong kinship sprung up between human and animal. The Ainu people fished alongside the bears, walked with them, and picked fruit with them. They also honored bear spirits with a brown bear ceremony. The bear god was believed to be one of the mightier beings in Kamuy Mosir, the parallel spirit homeland. Bears journeyed to this spirit land after their death by sacrifice, gifting their meat and fur to humans. In honor of the gift, the iyomante ceremony was initiated in which the bear’s spirit was sent home.[4]

The Torres del Paine National Park in Chile boasts some of the most spectacular natural landscapes in the world. Here you will find sedimentary rock formations dating back to the Cretaceous period, as well as breathtaking lakes, waterfalls, and even fjords. The park also boasts the Cordillera de Paine Mountain range and is flanked by two other national parks. The Torres del Paine granite peaks are one of the biggest tourist draws in the park. These three granite peaks are called Central, Monzino, and De Agostini. They were named after two Italian mountain climbers, Guido Monzino and Alberto Maria de Agostini, who were the first to ascend the peaks in 1957.

There are amazing encounters to be had with the wide variety of animals and birds in the park, including wild horses, the Patagonian gray fox, pumas, black vultures, and the majestic Andean condor.

In 2014, after a melting glacier in the park revealed new rock faces, scientists discovered nearly fully-preserved fossils of around 46 specimens of Ichthyosaurs. These marine reptiles lived around 245 million years ago.[5]

Sweden has its fair share of national parks, too, of which many cover the far reaches of the country. Here you can enjoy the thrill of nature with the added bonus of getting to see the aurora borealis lighting up the night sky.

The most visited national park in the country is the Abisko, which looks like something out of a Christmas postcard. Here, visitors are treated to magical landscapes, including emerald-green forests, snow-capped mountains, and fantastic waterfalls and fjords. Located in Swedish Lapland, the wildlife in the park includes lemmings, reindeer, the arctic fox, and even wolverines. The area also happens to be one of the best places in the world to view the Northern Lights.

Before it was a national park, the area was inhabited by the Sami people who became reindeer herders after switching from hunting to herding. Today the remains of ancient hearths and pit traps used by the herders to capture elk and wild reindeer can still be found in the park.[6]

The largest national park in Croatia is Plitvice Lakes. The park sits on karst, which is highly porous limestone, and incorporates 16 cascading lakes and around 90 waterfalls. The lakes are infamous for their ever-changing water colors, ranging between deep blue, green, and light grey. The changing colors are due to the amount of minerals or organisms, angle of sunlight, and calcium carbonate from the limestone rocks.

A longstanding legend has it that the Black Queen created the Plitvice Lakes after locals cried out to her for help during a devastating drought. Prošćansko Jezero, according to the legend, was the first lake she created. Rain poured down for days on end until the lakes she formed were filled. Some versions of the legend say that the Black Queen’s tears streamed down and filled the lakes.[7]

Charles Darwin arrived at the Galapagos Islands in 1835 and within five weeks discovered a host of unique species found nowhere else on Earth. This contributed to his theory of evolution. The island chain consists of 128 islands, islets, and rocks and was formed by volcanoes millions of years ago. Amazingly, 97% of the archipelago is protected as a national park, but the four islands inhabited by humans remain very vulnerable to development and invasive species.

On Galapagos, the only known lizards able to swim, marine iguanas, are thought to have evolved from land-dwelling iguanas who likely drifted out to sea millions of years ago before ending up on the islands. The most well-known species found on Galapagos is the giant tortoise that can live up to 150 years and weigh up to 600 pounds.

The islands were even used as a hideout by pirates during the 16th century. There was plenty of food and hiding spots for their loot too.[8]

Africa offers an astounding diversity of wildlife and many amazing national parks, conservation areas, and animal sanctuaries. Chobe National Park, Botswana, houses the highest concentration of elephants on the African continent, and the large herds literally cause the ground to shake when they pass by. The park is divided into four areas that each have its own distinct geographical landscape: Nogatsaa, Serondella, Savuti channel, and the Linyanti wetlands.

In March 1968, park warden Tim Liversedge discovered San rock art in the hills surrounding Savuti. The paintings are all similar, but experts believe they were created by different groups of San bushmen who moved around the area. The paintings depict hyenas, giraffes, and elephants and were created with “paint” made by mixing plant juice, animal fat, and rusty iron oxide taken from the surrounding rocks.[9]

1 National Park with a Difference

The Northeast Greenland National Park isn’t your conventional nature reserve. Spanning 972,000 square kilometers (375,000 square miles), it is the biggest national park globally, with only 30 countries around the world beating it in size. However, no people live in the area except personnel manning meteorological stations and the Sirius Patrol. Sealers and whalers have access to the park as well.

It only receives about 500 visitors a year, most of whom arrive on cruises to the Arctic. Tourists must apply for a permit from the Ministry of Nature & Environment before being allowed to visit and get the chance to see polar bears, foxes, and giant walruses in their natural habitat.

The area was also inhabited by various Inuit cultures for thousands of years who survived on the Arctic animal species. Today, the permanent number of people in the area totals less than 50.[10]

10 Amazing (and Heartbreaking) Stories of the Soviet Space Dogs

Ten More Really Weird Coasters from around the World

10 Festivals You Can Attend to Broaden Your Horizons

10 French Things That Aren’t French At All

Top 10 Movies That Destroyed The Studios That Made Them

10 Suicide Notes Of The Rich And Famous

10 Shocking Facts About Angola Prison And Its Violent Past

10 People (and Animals) Who Never Should Have Survived

10 Everyday Things Made with Animal By-Products

10 Demons You Should Probably Try To Avoid

10 People Stripped Of Honors And Awards

10 More YouTube Channels That Will Make You Feel Smarter

10 Times We Thought We Had Found Proof Of Aliens

10 Superhero Actors Who Have Their Own Tragic Backstories

Top 10 Times The West Said No To Free Speech

10 People Who Were Executed And Lived To Tell The Tale

10 Acts of Kindness That Were Repaid Exponentially