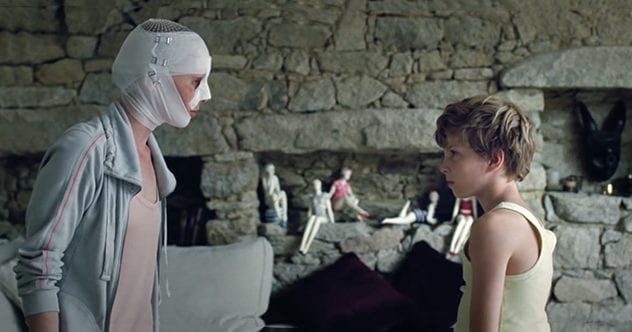 31 October might seem like the perfect time to watch Friday the 13th or A Nightmare on Elm Street. Perhaps a slasher film like Haunt or Prom Night will suffice to make the evening a little spookier, especially if it happens to be dark and stormy outside. However, if you want a Halloween night with a difference, you should consider lining up one or more of the movies on this list. Not only are they underrated, they are chockful of thrills, chills and scares, just the way the scariest night of the year should be.
(Potential spoilers ahead)

The Listverse Compendium Of 113 Halloween Horrors

[embedded content]
There is something inherently creepy about a mental hospital. And even more so when it is an abandoned one. Session 9 ramps up the terror as tension rises between the employees of an asbestos cleaning crew after they were hired to clear out an abandoned asylum with a terrifying past.

The hospital scenes were filmed at the real-life Danvers State Mental Hospital in Massachusetts, which housed up to 4,000 patients and where doctors engaged in techniques such as lobotomization and repressed memory therapy. The building was soon overcrowded enough for some patients to be moved to the subterranean tunnels.[1]

There is a scene of extreme nyctophobia (fear of the dark), that is incredibly unsettling as well as creepy recordings of a patient suffering from multiple personality disorder. All in all, Session 9 is a great option for a Halloween movie fest.

[embedded content]
There are gory, over-the-top horrors and then there are psychological horrors that creep under your skin and stay with you for a good long time after you’ve watched it. Before Hereditary and The Babadook spooked the pants off people came the not-often mentioned Austrian horror film, Goodnight Mommy.

Imagine coming home to your twin boys and they don’t recognize you. And imagine this happening after you had reconstructive surgery and your face is wrapped in bandages. Additionally you’re not as loving, caring, and interested in your boys’ beetle catching activities as you used to be, and they soon suspect that you’re not their mother at all.

This is the core of Goodnight Mommy with the story ticking over at a steady pace while an uneasy tension builds after twin boys tie up their mother when they become convinced that she’s an imposter with a bandaged face. While she is tied up, they start torturing her for answers…[2]

Throw in a killer twist and there you go, another great movie to watch on the creepiest night of the year.

[embedded content]
Who hasn’t dreamed of being part of a ghost hunting team that descents on creepy buildings in the dead of night in search of beings from the other side, and finally getting indisputable proof of the paranormal? After watching Grave Encounters, I suspect most would let go of this fantasy in a heartbeat.

In this Canadian found footage horror, the crew of a paranormal reality TV show work up the courage to lock themselves in a rumored-to-be haunted psychiatric hospital in order to film the next episode. Little do they know what awaits them in the dark and that that specific episode would end up being their last.

Sure, the characters subtly mock their real-life counterparts, but there are sufficient scares to keep you hooked. Do you dare enter the abandoned Collingwood Psychiatric Hospital this Halloween?[3]

[embedded content]
Dimension Films has produced some gems over the years, one of which is the underappreciated Dark Skies featuring Keri Russell and Josh Hamilton. Fans of The Fourth Kind will delight in this low-key sci-fi horror that had viewers taking to Twitter to let people know how terrified they were while watching it.[4]

There are weird missing food incidents, bird incidents and worst of all a young boy who starts dreaming about a terrifying being. The rest of the boy’s family start experiencing seizures, unexplained bruises and periods of stupor, causing the rest of the neighborhood to start looking at them askance. The ending also makes for one of the most riveting horror movie twists in recent history.

If you’re a sci-fi horror fan, this one might be right up your alley.

[embedded content]
Pet is a slow burn horror about a loner who falls in love and eventually becomes obsessed with a beautiful waitress. Seth spends his days as an employee in an animal shelter and as his obsession with the waitress, Holly, grows. It seems almost inevitable that he would take out his frustration at failing to win her over on the defenceless animals. However, he remains relatively kind to them while putting a devious plan into motion.

After her kidnaps her and locks her in a cage below the animal shelter, Seth and Holly begin a power struggle that is not only memorable but leads to a most unpredictable twist. Just as you think you know what’s coming, the film takes a different direction.

As with most horror films, this particular one is not for everyone, but if you’re looking for a horror with a difference, this might just be the movie for you.[5]

[embedded content]
Her name was Lola but she was definitely not a showgirl. She was, however, insane. In The Loved Ones, Robin McLeavy makes a terrifying impression as a loner, Lola, who is turned down by her crush when she asks him to accompany her to prom. From here onwards, the movie is dominated by fear and sheer terror as her crush, Brent, is drugged and kidnapped, waking up tied to a chair at Lola’s dinner table. Lola and her father are waiting at the table and the house is decorated as though a prom would be starting any minute.

The best part of the film is McLeavy’s performance. She puts the meaning of menace into each of her scenes and the overall horror roller coaster ride that the film forces you on is enough to make even the hardiest horror fan a little queasy.[6] If ever there was an anti-prom movie, this would be it.

[embedded content]
Slasher films are either good, or terrible (here’s looking at you, Scream 4). And then once in a while a movie comes along that stays with you for a long time because of the excellent storytelling, acting and overall portrayal of true terror. Hush is a prime example of this. It follows the story of a deaf woman being stalked by a killer in her own home.

It is 82 minutes of simmering tension and terror without any unnecessary jump scares or loud music cues to alert you that something scary is about to happen. There is a clever nod to Stephen King and the ensuing cat-and-mouse game that follows (more cat than mouse for a while there) is a fascinating way of telling a home invasion story that never falls flat. There are quite a few surprises in this film that make it a worthwhile inclusion for any Halloween movie marathon.[7]

3 It Comes At Night

[embedded content]
A forest becomes a refuge for a family who is trying to outrun a contagious disease that has spread across the world. This is the core story of the post-apocalyptic horror It Comes At Night, taken from writer-director Trey Edward Shults’ real life experience with his dad’s death after a life of addiction.

The movie has both a shocking intro and ending, but the middle part fluctuates between family drama, violence, coming-of-age and the all-encompassing knowledge that sometimes humans are the biggest monsters out there. There are no ghosts, zombies or werewolves lurking in the dark, but there are humans who are just ‘slightly off’ and add to the terror of the biggest pandemic the world has ever seen.

Seeing as how the Covid-19 pandemic still has a strangle hold on the world, this movie won’t serve to take your mind off things per se, but it definitely is one of the best and most underrated horror movies of recent times.[8]

[embedded content]
Robin Williams was well-known and well-loved for his comedic roles in movies such as Mrs. Doubtfire, Jumanji, and Fathers’ Day. When the 2002 film, One Hour Photo was released, fans saw a whole new side of Williams as he portrayed the role of Sy Parrish, a lonely technician, who becomes obsessed with a family.

In the movie, Williams is the opposite of his usual kooky self. His character is compelling and intense as he stalks the family and tries to become a part of their lives. When his illusion of what he deems to be the perfect family is shattered after an affair is revealed, his character becomes even more deranged.

This movie, too, is not going to be to everyone’s taste and is fairly disturbing in its subject matter, especially so for those who are used to seeing Williams in a light-hearted role.[9]

[embedded content]
A mother’s grief can be an all-consuming fire, leading her to do the unexpected and even macabre. This is the message from A Dark Song, the movie that portrays a mother who wants to engage in a gruelling rite that lasts for months to be able to summon her guardian angel. Upon doing so, she wants to use the wish the angel grants her to be able to speak to her deceased 7-year-old son.

The rite comprises of ‘exercises’ in which the mother, Sophia, must face off against angels and demons. The irritable occultist helping her eventually accuses her of not being honest about her true motives for conjuring up her guardian angel, after which he tries to ‘re-birth’ her.
This Irish-British independent movie is dark, true to its title, and makes heavy use of occultic themes throughout. A true contender for one of the best horror movies of the 2010s and a great choice for Halloween night.[10]

10 Non-Horror Movies That Will Scare You Silly This Halloween

Top 10 Behind the Scenes Tales About Tarantino Movies – 2020

10 Unbelievable Things Doctors Could Prescribe In Place Of…

10 Houses Of Horror And Their Eventual Fates

10 Bizarre Encounters With The Craziest Aliens Ever

10 Great White Sharks That Came In A Bad Second

10 Creepy Photos Of People Unaware They Are With A Serial…

10 Ways Being Attractive Can Work Against You

10 Moments In The History Of Heroin

10 Creepy Mysteries From Around The World, Including The…

10 Animals That Hunted Our Ancestors

Top 10 Synthwave Albums Of All Time

10 Times A Homeless Person Was A Hero (For Real)

10 Sinister Facts About Pablo Escobar That Everyone Forgets

Top 10 Deadliest Cities In The USA

10 Amazing Celebrities Who Survived The Holocaust